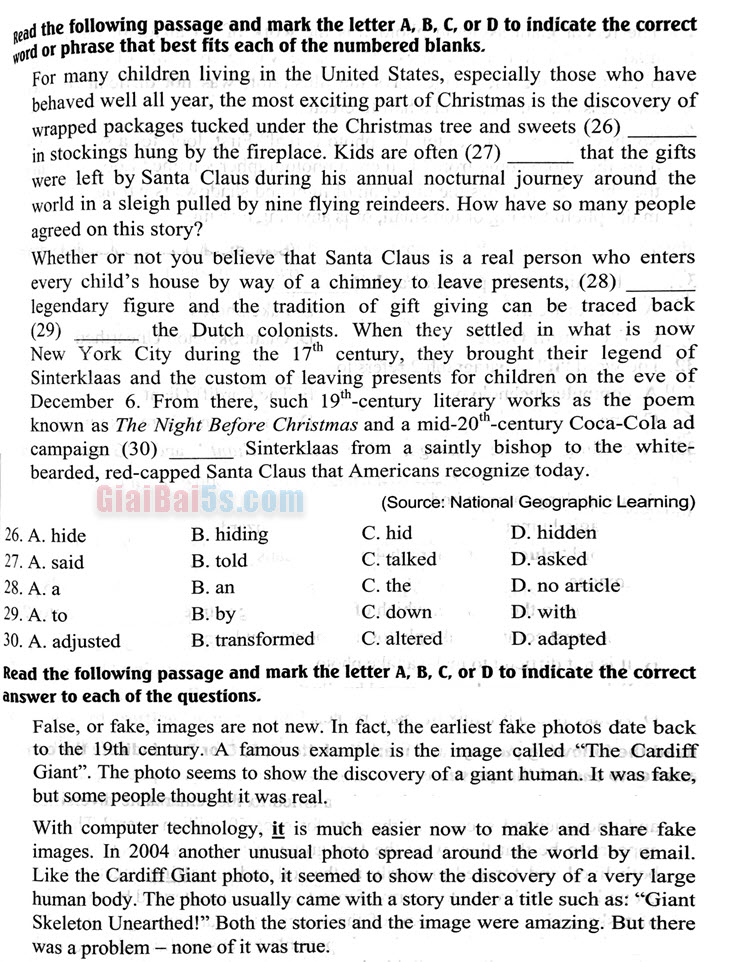 Mark the letter A, B, C, or D to indicate the word whose underlined part differs from the other three in pronunciation in each of the following questions, 1. A. picked B. mapped

Mark the letter A, B, C, or D to indicate the word that differs from the other three in the position of primary stress in each of the following questions. 3. A. wastepaper B. elastic

Mark the letter A, B, C, or D to indicate the correct answer to each of the following questions, 5. The engineers are going through with their highway project, the expenses

supplies had been cut off by heavy snow. A. replace B. fix

leaves from the trees, although their carnivorous tendencies extend to the occasional insect. A. should B. may

D). Saved one by one 21. The computer will go off automatically if you are not using it. A. sleep B. reset

hard to build an impressive resume. Now. I’ve realized how hard it can be.” A. to assume (it) would be that way B. to rely on luck

Read the following passage and mark the letter A, B, C, or D to indicate the correct word or phrase that best fits each of the numbered blanks,

For many children living in the United States, especially those who have behaved well all year, the most exciting part of Christmas is the discovery of wrapped packages tucked under the Christmas irce and sweets (26) in stockings hung by the fireplace. Kids are often (27)

hat the gifts were left by Santa Claus during his annual nocturnal journey around he world in a sleigh pulled by nine flying reindeers. How have so many people agreed on this story? Whether or not you believe that Santa Claus is a real person who enters every child’s house by way of a chimney to leave presents, 18) legendary figure and the tradition of gift giving can be traced back (29,

the Dutch colonists. When this citied in that is no Net Di Cily during ihe 17 century, they brought the legend of Sinterklaas du the custom of learing presents for children od the eve of December 6. From there. such 19″-century literary works is the perm known as The Vight Before Christmas and a mid-20″-century Coca-Cola ad campaign (30) _Sinterklaas from a saintly bishop to ihe white’bearded, red-capped Santa Claus that Americans recognize today.

Fizise, or fake. images are not new. In fact, the earliest fakebots date back 10 the 19th century. A famous example is the image cailed “The Cardiff Giant“. The photo seems to show the discovery of a giant human. It was fake, but some people thought it was real. With computer technology. it is much easier now to make and share fake images. In 2004 another unusual photo spread around the word by email. Like the Cardiff Giant photo, it seemed to show the discovery of a very large human body. The photo usually came with a story under a title such as: “Giant Skeleton Unearthed!” Both the stories and the image were amazirg. But there was a problem – ilone of it was true.

The recent giant skeleton photo was the work of a Canadian illustrator. He made it for a digital art contest. The image was really a mix of three different photos. Making the image, says the illustrator, was not difficult. In fact, it took less than an hour and a half to create.

So, how is it possible to tell if a photo is real? First, look for a source. Where does the photo come from? Is there a photographer’s name? Look for clues in the photo. Sometimes the direction of light and shadows is wrong. Is anything in the photo too big or too small, or is anything missing?

(Source: National Geographic Learning) 31. The best title of the passage can be A. Fake or Real?

Unearthed!” both show A. a very large human body

What unusual or unique biological traits led to the remarkable diversification and unchallenged success of the ants for ever 50 million years? The answer appears to be that they were the first group of predatory eusocial insects that both lived and foraged primarily in the soil and in rotting vegetation on the ground. Eusocial refers to a form of insect society characterized by specialization of tasks and cooperative care of the young; it is rare among insects. Richly organized colonies of the land made possible by eusociality enjoy several key advantages over solitary individuals.

Under most circumstances groups of workers are better able to forage for food and defend the nest, because they can switch from individual to group response and back again swiftly and according to need. When a food object or nest intruder is too large for one individual to handle, nestmates can be quickly assembled by alarm or recruitment signals. Equally important is the fact that the execution of multiple-step tasks is accomplished in a series-parallel sequence. That is, individual ants can specialize in particular steps, moving from one object (such as a larva to be fed) to another (a second larva to be fed). They do not need to carry each task to completion from start to finish – for example, to check the larva first, then collect the food, then feed the larva. Hence, if each link in the chain has many workers in attendance, a sense directed at any particular object is less likely to fail. Moreover, ants specializing in particular labor categories typically constitute a caste specialized by age or body form or both. There has been some documentation of the superiority in performa net energetic yield of various castes for their modal tasks, although careful experimental studies are still relatively few. What makes ants unusual in the company of eusocial insects is the fact that they are the only eusocial predators (predators are animals that capture and feed on other animals) occupying the soil and ground litter. The eusocial termites live in the same places as ants and also have wingless workers, but they feed almost exclusively on dead vegetation.

(Source: TOEFL Reading) 36. Which of the following questions does the passage primarily answer?

and ants is that termites A. live above ground

Α. 14. It is common knowledge that the Earth is one of the eight planets to orbit

the sun. 45. Students normally take their final exams in the end of each semester. A B

D Mark the letter A, B, C, or D to indicate the sentence that is closest in meaning to each of the following questions. 46. Everyone was surprised that the singer had very little money when he died.

Mark the letter A, B, C, or D to indicate the sentence that best combines each pair of sentences in the following questions. 49. I like these trees. I usually sit under their big branches to review the lessons.